he, we and they 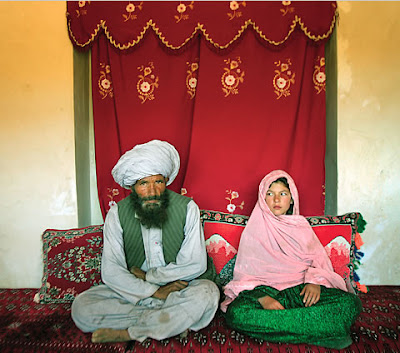 
http://www.rediff.com/news/2008/jan/24marriage.htm
Opposing the recent Supreme Court order making marriage registration certificates mandatory, the New All-India Muslim Personal Law Board on Wednesday said the community would not accept the directive, as it was an infringement of the Muslim personal law.

Muslims are governed by their own rules which are different from the rules of other communities," said Mr Hashmi.

He stated that according to Shariat law, a girl can marry once she attains the age of 16 years, whereas the Constitution allows marriage only after the girl reaches the age of 18.

Is that an open admission ( or threat ?) that "we" will marry off our girls at 16 itself ? ( partly also making sure that the girl does not fall in love with a kafir by any chance.. oh even if she does, there are people ready to kill the kafir). As a matter of fact some of my classmates got married when they were in 9th ( even factoring in 1 or 2 yrs of failed classes, that would be max 16 !) and stopped schooling... and mind you I studied in an "English medium" Christian run school .. so imagine the situation in those aided Muslims schools ( my mom who teaches in one such tells me cases of Muslim girls getting married after 7th class itself) or government schools

By the way, so as per Shariat its 16 years... but what about "prophet" Mohammed ?
http://www.faithfreedom.org/Articles/sina/ayesha.htm
The thought of an old man becoming aroused by a child is one of the most disturbing thoughts that makes us cringe as it reminds us of pedophilia and the most despicable people. It is difficult to accept that the Holy Prophet married Aisha when she was 6-years-old and consummated his marriage with her when she was 9. He was then, 54 years old.

There comes the he-we-they classification of Islam ! Its one law for Mohammed, another for Islamists ( i.e those who stick to QHS - Quran, Hadith and Sunnah ) and third for non-believers
( of course within the "they" the grade of punishment differs for Jews/Christians/Hindus..)

Here is another example
Marry women of your choice, two, or three, or four says Quran 4:3

And they say 4 is the limit... but what about the PPP ( the first P for "Piece-loving", the third P for "Prophet" and the middle P, you make your own guess based on the paragraph in red above ) ... Our man conveniently marries 9 or more ... ( the following link has a list of his wives)
http://www.wikiislam.com/wiki/The_Marriages_of_Muhammad:_A_violation_of_the_Quran
Whenever I think about this I am reminded of Lalu Yadav.... Apparently at one time our man was giving a speech on the importance of family planning .. and some one asked him, "how can you advocate family planning when you yourself have 2 sons and 7 daughters ? " and Lalu is said to have replied " I have the experience and thats why I am telling you " ....... so may the PPP was also smart as Laloooo
on January 24, 2008 1 comment: Links to this post

So was it indeed the injustice of the second test "defeat" that ensured the victory at Perth ?

Or did India deserve a victory in the second test itself ?

justice denied or cat cornered ? or both ? Does that say anything about our National character of being "reactive" than proactive to attacks on us ?

Whats with India repeating its 2001-Kolkata "achievement" of stopping the Kangaroos exactly at 16-in-a-row test victories ?

just some random thoughts
on January 19, 2008 3 comments: Links to this post

The "modi"fication of Indian politics - which way ?

One is the former chief minister of the Southermost state of India. The other the same of the northern most state. Both "former" NDA allies ... and both unusual in their own respects ..

Unusual ? yeah read about Farooq Abdullah - and his family - Among other interesting stuff, he himself is married to a lady of British origin, his Muslim son has married a Sikh girl and one each of his daughters married to a Muslim, an African based black Christian and a Hindu ( son of Rajesh pilot who got ( or was ?) killed in a road accident ) .... Well, not even the Nehru family can beat that "diversity" I guess

and read about the "Amma" of politics - remember the initial period of the 13-month Vajpayee government or the tea-party with MMS ( Madam Maino Sonia ) or the Kanchi Acharya incident ? what defines her more than anything else, when it comes to National politics, is unpredictability ..

At yet, these two were recently in news, in connection with none other that Narendra Modi.... Jayalalitha with a "45- course Pongal lunch" and Farooq for being in the firing line for having praised Modi's victory .. Indeed the media was quick to call both the moves as an attempt to revamp old alliances, and indeed as yet another sign that Modi is planning on entering the National political scene sooner that later.

May be they are right, but to me the more pertinent question is, how far is this going to help the BJP ? True both these parties ( AIADMK and NC ) belong to states where BJP does not have strong allies, and simply cannot hope to win any seat if went alone.. Also true that in 3 big states - MP , Rajasthan ( both due to anti-incumbancy against present state govts) and UP , BJP may not stand to get too many seats, making the "alliance" states all the more important for NDA

But amongst its core voters, would it damage the BJP pre-poll ? allying with some one in the south accused of so many corruption cases, and with some one in the North who was a former JKLF activist ( sure, one can give them some benefit of doubt that they have impoved , but still ....) ! And also, how much of a "headache" they will be post-poll, assuming NDA does win ( which in my opinion is still a 50-50 ) .....

So many assumptions - that the BJP will ally with these, ... that the NDA will win in 2009... and let me add the third assumption , that Modi will indeed enter into National politics.... in such a case perhaps the answer to these questions, the answer to where India would be heading in the next decade, lies in whether the allies will modify the "CM" or the "CM" will "modi"fy them ....
Time alone can tell
on January 15, 2008 No comments: Links to this post

As a small child, around my first-second standards I guess, I used to eagerly watch out for the Amarchitrakatha-Mahabharata .... I would know exactly the day it would come out, and as my Father or Mother gets back from work ( I used to get back first from school and wait for them) would be looking into their hands from a distance, if they were indeed carrying the precious possession that I am looking for .....

By the time I was in 5th or 6th and of course by highschool, I could ask for money and buy whatever I wanted .. and by then, what I would look for is "India Today" ! I believe the magazine started becoming popular when they started the regional editions including Malayalam .. and inspite of being an voracious newspaper reader, I would look fwd to the biweekly ( if I remember correctly, at that time biweekly and later it became weekly) magazine

So what was it that may have caught my attention so much ? First may be the magazine had a much more National perspective than any other print media available in Malayalam at that time ( and no, up until my highschool I hardly read English newspapers or not even many childrens books, comics etc) . Secondly, the magazine always had a very "graphic" oriented reporting style... Their pictures, their maps, charts,....... had a quick impression. And finally the reporting style ... it always had an undercurrent of excitement ( I am not calling it sensationalism as I did not feel it was the "cheap" variety ) .. and unlike many media even at that time, I believe not have that much of an anti-right bias 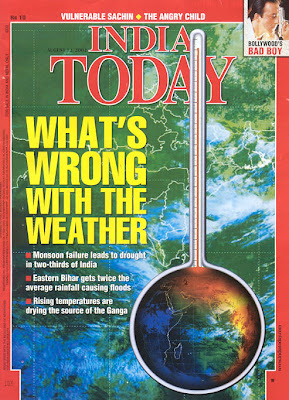 During my undergrad at IIT Chennai, the hostel commonroom would get the English edition, along with many other newspapers and magazines including its rival - The Outlook ( I felt that it was more or less a Congress party mouthpiece from the very first issue that I ever saw ). Somwhere along the line, especially after it was made weekly, and thinner ( but with may be the same amount of ads) , I felt it was perhaps slipping in its quality, but continued to be my favourite among weekly magazines. The Mallu-Christian-Manorama-Congress run "The Week" , the commie run "Frontline" , "Outlook" , where the other major ones thand at I used to browse through
Once in US, I started looking for the online editions, and to my dismay all but India Today were free. Initially I could get around, as I tried some random 4 digit code, and it worked !! I could read India Today online, but not for too long... and slowly, reluctantly, I started reading Outlook more often, or sometimes even frontline !
Looks like the long wait is finally over :-) ... http://indiatoday.digitaltoday.in/ ( I donno from when on it is online, but I saw this only recently) . Now,I am not quite sure in the past 3-4 years how their political bias has changed, if any. Except for "Daily Pioneer" all English Language Media ( E L M) can more or less be classified as pro-left / pro- Congress .... ( see my post on Modi, below) but I am guessing ( or is it just a hope) , atleast not so much "India Today" .. A friend of mine used to say "Smart journalism is if you can write about some one whom you like, in such a way that on the surface it appears a citicism, but is actually a either a positive criticism or even a positive aspect given a negative spin" ... and a BJP supporter that he was, used to say that he used to actually get thrilled reading some of the magazines "criticism" of the party !!
really ? Something like saying "The biggest problem with the show was that it was overbooked and people could not get tickets " ?
Well, may be you can look at the issue before the Gujarat election (dec 17, 2007) on Modi, and decide for yourself http://indiatoday.digitaltoday.in/index.php?latn=1&issueid=31&page=archieve
For now, I am just happy catching up with an old friend of mine :-)
on January 05, 2008 No comments: Links to this post