the blacks and whites of life

For the past 3-4 weeks, I have been busy organizing a 1-day SpokenSanskrit workshop in Bangalore. These are some random points from the same

0) Normally Samskrita-Bharati does 10-day workshop --> 1.5-2hrs each day , totaling 15-20hrs. This sometimes becomes not-so-easy for the working class to attend. Assume either the attendee or the teacher has to commute 30mins for the workshop one-way.. for a 15hr workshop, he/she is ending up commuting a total of 10hrs (1hr each day, X 10 days). This becomes all the more important in a city like Bangalore where traffic is such a problem.. and then the issue of continuity - a person drops for 1-day, the next day he is a bit hesitant to go.. and so on... Many of SamskritaBharati's 10-day workshops, if starts with 2x people, is likely to reduce to x or even sometimes less than x, by the last day .. NOT because the classes aren't interesting , but mainly due to "logistics"..

1) While in US, some of us came up with the idea of weekend workshop - either 2 saturdays, or 2 sundays - each day about 9am to 6pm.. (about 12-14 hrs of class, but there is an efficiency factor because of the continuity that makes it equivalent to a 15hr class). I have been part of such successful workshops in US .. and then successfully experimented this in Chennai (with a good percentage of "IT crowd" ) about 6 -7 years back. Of course, we have found that here too, on the second day (i.e the second weekend) of the workshop, the numbers reduce.. but going by the commute math, for 15hrs of class, the attendee/teacher has to travel only 30mins X 4 times -- i.e 2hrs .. 20% of the 10-day one

2) For Bangalore however, we decided to experiment with a 1-day "jump-start" (as one of my friends later called it...) .. just one-day 9am to 6pm .. I booked an a/c hall, in the center of a well-known place, put up a blog(web-page) by Oct29 or so.. with a google form to register..  workshop was on Nov19, so I had 3-weeks to publicize.. 1st and 3rd week, I did quite a bit of online campaign, as well as "print-out" campaign (second week, I diverted my attention to another "cause", partly for the need of it, and partly as I have learned from experience that if I continuously campaigned for 3-weeks, I would get so attached, and "so-mad" if something disappointing happens.. so needed a "break" in between. ) Below is the "web-site" hits graph, which also reflects this "dip-in-second-week"

3) Workshop was free, but prior registration was requested, either online, or through phone.. Within the 3 weeks, there were approximately 2200 hits, (about 1500 of it from India.. out of that my guess is about 1100 may be from Bangalore). By the time we closed registration, we had 44 (i.e 4%) . I knew from experience that only 60% would show up -- and that is exactly what happened.. 28 people before lunch, and 22 till the end. Overall ( hall, publicity, some snacks/juice during the workshop, other incidentals), the expense was 8000-9000 rupees, which I took as a donation towards the cause . If this were a "500 rupee per registrant"event, it is likely that registrants/attendees would be more

4) As with most of these events, there were so many interesting "learning".. While exploring a place for venue, some told me "great idea, I will surely come.. ".. or "many of my friends said they will come if it is on a weekend"...  Alas, as the registration opened, none of them registered... the reason given by some was that it is about 20-30 mins drive from where they stay.. they wanted it at their door-step ... and the question from many who called me was, when are you organizing at my place.. Boy, for a whole day event, you can't commute even for 30min + 30mins ? Interesting.... But, as anything in life -- the black and white aspect -- there were some who commuted 1hr+ and came also..

5) And then there are some people, esp whom you frequently meet in office or in your apartment, who keeps telling you "I am really interested".. there are some to whom I have suggested 3 or 4 events before .. and every time when the actual event neared the answer was "sorry, today I am not available" -- same this time, in spite of it being in some of their door steps.. well, yet again, I can only say, let me remove you from my "interested" list. First time - may be inconvenience.. second time too may be.. third time and fourth time... well, if you are not showing up, it simply means it is either way  down in your priority.. or it was just a show-off ..(and interestingly, some of my friends are experts at preaching/criticizing..but not doing anything useful for others...  and some are even of the type who I feel like asking "is there anyone or any organization that you find anything positive about at all ? ") ...  and by mentally removing from my "interested" list, at least I will not feel guilty next time that "oh, I forgot to inform you about it".. And again, the white part.. there are some who you never thought might be interested, but eventually end up attending and some even sitting till the end

6)  By the way, don't ever assume that the event was a one-man show.. (my previous points may have made it appear so.. apologies).. As usual, from the SamskritaBharati volunteer/teacher side, and from unexpected quarters too, help came aplenty .. there were 3 teachers, at least 2 other volunteers who majorly helped on the day of the event, bunch of attendees, who came as early as 8.30am and offered help and many who helped with publicity.. and I am not too worried about the 96% who saw the website, but did not register.. the 40% who registered and did not show up.. "the news reached them"

Finally, let me end with a small incident..   about 4 or 5 days before the workshop, the registration number was at about 20 .. and with the 60% logic, that meant 12 would show up... for a few hours that day, I felt a bit let down... in spite of 2 weeks of publicity,  that is all what I got ? I forgot the basics of "nishkaamakarma"..and started considering "no more effort from my side, will leave it to destiny" and then something unexpected happened.. that very night, I got pinged on whatsapp from an unknown number.. and in samskritam, the lady said "you taught me samskritam, remember me ?" (the chat was in samskritam).. for a moment I thought it was a case of mistaken identity.. there are at least 2 samskritabharati teachers that I know in Bangalore with my name.. and I am not a teacher per se - I do not teach workshops... I only organize them.. I can run the "follow-up classes"  .. and I could not recognize her profile picture on whatsapp.. (well, I am bad with memory-of-faces in general) so I asked her "are you sure it was me?" .. she insisted it was me... and slowly came the details.., all in samskritam..  6-7 yrs back, in Chennai, she was an IITM student at that time.. I am not sure if she attended the weekend workshop or the 10-day workshop ... post that, I used to conduct follow-up classes at my house every weekend.. and she was part of that.. slowly I remembered her name.. and she typed "I am delighted you remember my name" (again, in samskritam).. I simply did not have words to tell her my feeling at that time -- all I can tell is "naShTOmOhaH .. smritirlabdhaH" ... that moment I decided, I am not worried about the registration numbers, I have 4-5 more days to go, let me try my best.. what if, it is the person who hears about this in the 11th hour, comes, attends, and keeps up the learning and who will, may be ping me yet another 6 years later (if I am still alive, that is), and tells me "you taught me samskritam", though I never did, and I was "nimittamaatram"

the final lap of state elections 2017 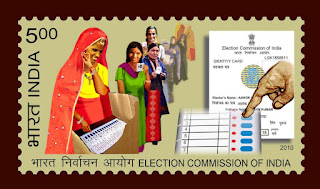 The ones left are HP and Gujarat.

1) HP: Looks like RaGa has already given this up...- which is bad news for BJP because after all there is no better campaigner for the BJP than RaGa :-) .. but BJP likely to wrest it from Cong

2) Gujarat: Interesting AAP seems to have given up and shifted focus (or rather trying their "testing waters" in MP now) ... and may be the Gujarat AAP strategy is part of the "gharvapsi" to Congress so that opposition(to BJP) votes do not split -see my Gurdaspur example https://twitter.com/drisyadrisya/status/919552766002970625 . And then all the chotta leaders who have popped (none of who, I have heard, talk any sense till date). It is likely that BJP will retain, though majority may reduce - but more importantly BJP Gujarat has to start worrying about grooming next-Gen state leaders a la Shivraj Singh Chauhan or Raman Singh who can retain power with not so much help from Modi

Congress on the other hand is getting desperate - knowing Modi is invincible , they are attacking his two key aides in the name of their sons.. clearly, it is noise without substance generated before the election, and meant to subside after the elections. Will it cut ice with people of Gujarat ? less likely.. and it is likely that despite all dirty tricks, Congress will lose.. and yet again go into depression mode

I do not have too much expertise and ground level knowledge on these states, so my predictions above are more of gut-feeling. Now, I tend to "believe" in a alternate-year-is-good logic.. end-of 2013 to 2014 was good for BJP  - center as well as states like Maharashtra, Jharkhand, etc etc - https://en.wikipedia.org/wiki/2014_elections_in_India#Legislative_Assembly_elections

2016 - well, was somewhat of a neutral/good year - Kerala/WB/TN are states with not much at stake for BJP... Whether 2017 would be good for BJP, mainly depended on UP .. and there was magic.. If BJP retains Gujarat, I will mark 2017 as a good year for BJP (with "small" losses in Punjab state elections and LokSabha bye-elections). But then 2018, may not be so good for BJP... Karnataka --> is not going to be easy (I will cover in future posts), so also the currently in kitty Rajasthan/Chattisgarh/MP (in my opinion, the toughest is listed first). But then, that is okay, some sort of a set-back is needed before vigorously getting back in 2019 - read my earlier posts http://drisyadrisya.blogspot.in/2013/12/why-36-may-be-better-than-4.html and followed by http://drisyadrisya.blogspot.in/2014/05/how-battle-was-won-and-why-war-still.html (part2)