Got this fwdd from a friend
"Awakened Bengal, Bengaluru"
presents
"My People, Uprooted"
Speakers include:

Please join us for the evening and invite others. 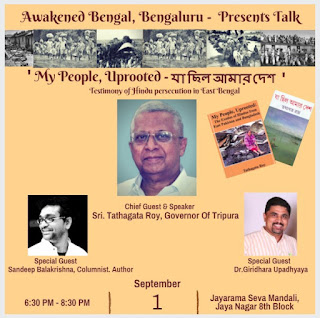 Humam Khalil Abu-Mulal al-Balawi is probably the most famous (or infamous, depending on which side you look from) triple-agent of "our times". He graduated in medicine in year 2002 (yes, Dr Humam Khalil ...) , was arrested by the Jordanian security service in late 2007 and was believed to have been transformed into a double agent loyal to the U.S. and to Jordan. Two years later, hours left for the "new year of 2010", the doctor "struck".  To quote the rest of the story from http://www.toptenz.net/10-brilliant-double-agent-spies-history.php

Al-Balawi was sent to Afghanistan and assigned to report Al-Qaida’s activities. He did report enough to win 100% of the CIA’s confidence... One day, he announced that he had a very important bit about Ayman al-Zawahiri, the current No.1 of Al-Qaida. He said that he needed to convey the information only to superior officers, so he was called in to the CIA command office . Since he was late and senior CIA officials were anxiously waiting for him, nobody bothered to check him for security precautions. He went straight in. Once inside the office, he blew himself up, killing seven CIA officers and two military officers. This was the deadliest strike on the CIA in more than 25 years.

Why did I bring this up ? Sorry, the connection may be clear - if at all - only by the end of the post. Let me switch to excerpts from a speech RaGa gave last week 17Aug17 or so - "Congress vice-president Rahul Gandhi accused RSS of trying to infiltrate every institution of the country, including bureaucracy and judiciary......" 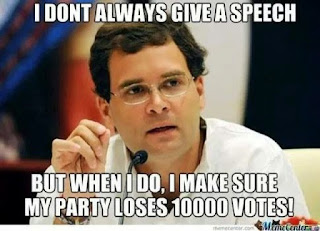 Interesting, later he mentioned "media" also . This seems to have thrown some not-so-pro-BJP MSM folks also over the fence .. Bhupendra Chaubey of CNN was seen shouting (cant outshout Arnab though) - Rahul Gandhi is hinting that I, Bhupendra Chaubey is controlled by the RSS ! How ridiculous . Most media MSM or social, pretty much ignored this as yet another "pappu rant"

But wait, I for one actually think that for once RaGa has actually spoken a half-truth. Consider this, almost 10-15 yrs back, a VHP person I knew in US (who was then in his seventies), actually expressed the opinion, privately of course, that "Launching a political party like BJP was never a sangh plan. In fact BJP  is a disaster". So what did the "sangh" want then ? In his opinion, the sangh's aim is "Man-making for Nation building", and these men and women, well entrenched in patriotism and selfless-service, should become part of every organisation -- including main stream political parties like Congress and even the left !

Boy, it sounds very much like another of sangh-fantasies, like "We can unite the Akhand Bharat again" . I mean, having a "selfless patriotic person" at the helm of Congress party !! But may be, such a sangh plan actually exist(ed). Post 6Dec92 many in the Congress actually believed that PV NarasimhaRoa was an RSS guy. To me, a bit more "credible" one was the ex-CEC TN Seshan standing against Advani in the 1999 General Election from Gandhinagar . Though he knew that he would lose, the aim - some say - was to become prominent in Congress (having head-on stood against Advani), and the brain behind this move, I once heard, was an RSS man from Coimbatore !! History tell us though, it did not click. The latest in the list is Pranabda - was (is) he a pro-RSS man within Congress ?

So RaGa is right,RSS  wants everything "sanghised"- most prominent is his own party.

Sometimes I wonder if folks like Mani Shanker Iyer or Digvijay Singh are indeed so anti-BJP, or are they just playing a game from within Congress. After all Iyer's infamous "Modi can come sell tea in AICC" jibe that was brilliantly turned around into the Chai-pe-Charcha strategy.  Digvijay Singh's mentoring of Rahul Gandhi is probably what made him actually believe in "Hindu extremism is a bigger threat to India" , and covertly support the various "saffron terrorism" allegations, which now Rebuplic TV and Times Now are competing to expose as a Pakistan+Congressparty plot , and thereby backfiring big time on the Congress

So now, back to my "triple agent" example. With Amit Shah openly declaring wanting a Congress-Mukt Bharat, and actually showing that in practice over the past few months, has the Sangh given up its idea of "taking over the Congress party using some real patriotic folks", and just make it one National party (BJP) vs some regional parties game ? Or is this actually a beginning towards that grand plot - eventually achieving a situation where there are two National parties - one an openly pro-RSS BJP, and the other a subtly pro-sangh one (a "taken-over"Congress or a new party) ?  The double agents and the triple agents within parties will decide the fate of Indian politics in the years to come !