raising the bar ? whither terrorism ? 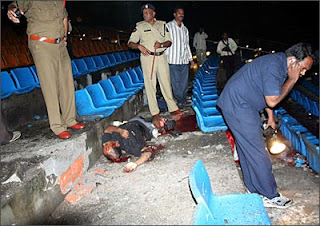 Last year after the Mumbai 7/11 blasts, when the city rolled back to life the very next day ( unlike a NY that was paralysed for days after 9/11), many in the media and social circles applauded it as resilience

In the wake of todays blasts, I am now starting to wonder, was it really resilience, or a steady loss of sensitivity ? - something that the islamists (a.k.a terrorists) want to happen by making sure that there are at least 3-4 major blasts in different parts of India every year......

aided of course by the psecs who shout "hindu -muslim brotherhood " (also known as goat-butcher brotherhood, a la "Hey Ram" movie ) or "islam is a religion of peace" in the wake such incidents.. of course there is a PM who wud now lose sleep on what the psychological effect of this wud on the Muslim community which fetches him a crucial 50 odd seats to keep the power !!

And there willl always be a Pakistan or a Bangladesh to blame for ( so that the Indian Islamists remains a non-dangerous marketable commodity on paper ) .. no sane person wud ever believe that all this is possible without an indian islamists terror netowrk --- of course, the blame for that is naturally on a Taslima for bringing out the truth of islam or a Gujarat (sans Godhra of course ). In short, heads Hindus lose, tails Islamists win ! 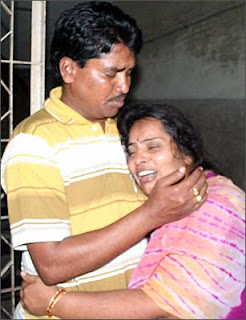 As my friend says, terrorism will stop ONLY on the day a substantial number of Muslims realize that they are also " victims of Islam " and either re write the Quran or mass convert out of it..
on August 26, 2007 2 comments: Links to this post

trifurcation and other personal stuff

yes, finally I started a seperate Malayalam and Samskritam blog, just so that I am forced to write more there.. !! well, with my current situation I have no clue why I am getting into more promises myself, but then thats the call, and here I go !!

as for Malayalam, I have been feeling for some time that I am steadily losing my touch with the language and the land, and hence that ....

Ummm so the votes seems interesting... and for now I am going to fulfill a bit of that 16% request for personal stuff !! Long time before I had a post on marriage and caste

Its over a year now, and as expected I got so many rejects for intercaste proposals ! I wud not blame those parents, it ain't easy to change things overnite.. neither am i oppossed to same caste marriage, which is where mine might head mostly (oh no no, don't have to jump on me, I am just stating a trend, not any major "developments"- atleast so must u believe !!)

but I am glad on three counts

2) that there were almost four of five girls/families that did respond positively for an intercaste arranged marriage proposal (two from nearby universities...two from india ) , but due to other reasons those did not work out ....

3) i inspired or atleast encouraged one cousin of mine to have a "caste no bar" on her profile.....

but most interestingly , two of my younger cousins in India - one on fathers side and one on mothers side, and getting married on Aug 31 and Nov 18 respectively, BOTH love marriages BOTH intercaste :-) .. in fact one of them had kept his cousins, thats us , posted for quite some time and gathered our support before he took it to his parents .. his "girl friend" even text messaged me (and then we spoke) when i went to India .. The other had given indications to me "Some people are waiting here to see their elder cousins get married".. and I replied "You will grow white hair if u wait for me.. I shall give you a No Objection Certificate" .. he seems to have used my NOC !!

good luck dear brothers, and glad that the families on both sides were supportive......
on August 21, 2007 2 comments: Links to this post

cricket, for a change 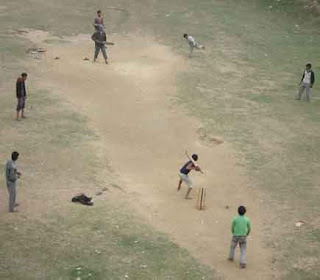 After a long time, I kind of got hooked on to following the test series in England.. may be because these days I am almost always on a computer during day times... and seeing Dhoni blast off and Kumble inch towards his maiden test century, I even started following cricinfo... the li'l score window will be open as I did my work on the comp...

The third day as I saw the Indian team almost wrap up England with more that 300 runs lead, I was hoping that indeed, 60 years after their colonial rule, we could give England a fitting 2-0 test series victory two days before the I-day....

ney.. that was not to be.. even though we won the series 1-0, I am pretty sure, lot of Indian fans would be struggling to come to terms with - why din't we make england follow on ? no explanations so far has satisfied me, it defies any logic.. except - we Indians lack the killer instinct.. one victory, and we want to just bask in its glory for a long time, not-bothered about winning the next one

in fact this point was raised by an Indian friend of mine who works in the US .. "it looks like as a race, we Indians lack that 'go for the kill' attitude"..... may be true.... ne comments from readers?

meantime, I have also been surprised, how come after a Kapil Dev (or even say Ravi shastri, even though the time I started following him, he was the - backfoot defend on a full toss and sixes for his leg spin kind) India never produced all rounders ?! wikiedia list has no Indians among the 8 batting all rounders, Irfan Pathan (Oh come on, update the list folksssss) among the 10 bowling all rounders and Mahendra Dhoni among the 4 WK batsmen ... some solace, but I still feel that the Haryana express was the last of the all rounders we produced so far..

oh well, i better get back to my work :-) .. once again cricket has been dissappointing enough for me to not get re-addicted !!
on August 13, 2007 3 comments: Links to this post 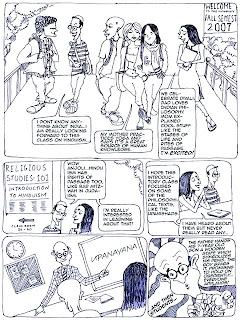 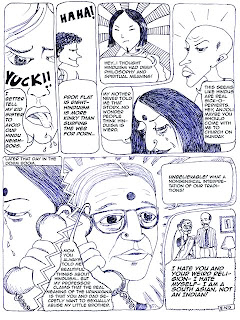 A series of articles written by a retired IAS officer in newstoday published from Chennai
based on the recent book,

INVADING THE SACRED: An Analysis of Hinduism Studies in America
edited by Krishnan Ramaswamy, Antonio De Nicolas and Aditi Banerjee

Long time before I used to be in touch with Aditi ( American born, now a practicing attorney in NY, who has been doing a lot of research in Hinduism studies in USA and writes often for outlook.. ). I may have met and known Krishnan Ramaswamy also, even though I am not sure if its the same person....

by the way, the official website is http://www.invadingthesacred.com , where I also took the cartoon from

"Hey did you know Priyanka Chopra is coming to the parade this year".. that was one of my colleagues telling her friend about the Independence day parade in NY - this year on Aug 12...
"I don't think its Priyanka, I heard its Urmila" replied the other

As I drove down the New Jersey Turnpike, I was lost in thoughts... its her 60 years after independence... How do I celebrate ?

Two hours thence, hopes have turned into .. may be fears and sleeplessness, that I am up on my bed past 12 and penning this !! And all I did was run my mind through some of the recent developments ...

Sleepless, did I say ? The good news is that I share the quality with the PM of India Man Mohan Singh .. the bad news is that the latter is losing sleep over how to protect alleged terrorists ! (1) .... to the extend where the former chief of anti-terrorism unit of RAW wrote ‘‘God save this country and its men, women and children from the depredations of the jihadi terrorists. Since our own Prime Minister has let us down, what else can we do?’’ ... A former IB chief was no different in his opinion (2)

The esteemed Prime Minister did not lose sleep over last years Mumbai blasts ( the 7-7) .. neither did he bother to observe the anniversary ! (3) .. Of course, after all this one obviously cannot expect him to have bothered when sometime in end July a brave Col Vasanth sacrificed his life fighting Islamic terrorists in Kashmir (4) ...

But he would sure lose it if any of the perpetrators of the numerous terrorists attacks on Indian soil in the past few years ( Malegaon, Jama Masjid, Mecca , Ayodhya, Samjhauta Express, Sankat Mochan Mandir , the Indian Institute of Science, Sarojini Nagar in New Delhi to name a few ...... ) are brought to justice.. or if Afzal Guru (5) - the convicted terrorist - is brought to justice ...

Least surprised would I be if the two MMS ( Man Mohan Singh and Madam Maino Sonia) were involved or indeed master minded it such that ex-President Kalam never received the papers of Afzal Guru (6) .. and now they have in place a corrupt (7) puppet Pres and so things are much more easy ...And no surprises as the two major parties supporting the Prime Minister - namely Congress and the Left- welcomed Madhani the Kerala based terrorist after having spent 9 years in jail, with open arms (8) ...

Uffff.. compared to all this, the inappropriate remark on the opposition leader's mother by the AP Chief Minister (9) seems a bit less a crime, doesn't it ? and the continued calls for reservations for vote-banks by Union Ministers even go unnoticed (10) .. Is it fatigue ? Is it a loss of sensitivity ? sensibility ?

One may say isn't the 123 agreement (the Indo-US nuclear deal) a silver lining ? Once a supporter of the deal, over time I have lost confidence in it... and the what shook my hopes in the bilateralness of the deal was this passing comment by K Subrahmanyam "The 123 Agreement was drafted by US lawyers. No lawyers from the Indian side were present"
WHY ? Doesn't that bother you ?!

I can go on and on.... what can one do ? rather than keeping faith in those word of Aurobindo... "India of the ages is not dead nor has she spoken her last creative word; she lives and has still something to do for herself and the human peoples"(11)..........

I usually do not miss an Independence day celebration- be at IIT or at the local Indian community in US or in the University (I consider it fortunate to have been founded the group which initiated it) .. and most times, while I salute the tricolor, my eyes will uncontrollably be filled....

this year too I am sure they will be filled... but for all the wrong reasons !!