The "Maya" of Manmohan 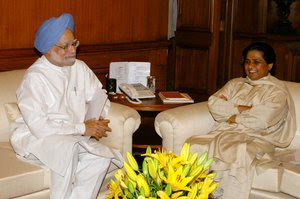 The "Congress may be bad, but we trust Manmohan" fellows can continue to defend the PM, but over the years it is quite clear to me that either the PM has been enough "Congressised" or that the real Manmohan was always hiding behind his thaadi ,... i mean a mask ( yes, "mukhauta" ) ........ or both

So why exactly is there a possibility or at least a "hear it loud announcement" that Indian PM may resign if impasse over nuclear deal persists . That step, the PM perhaps is hoping, will achieve him a few things -

a) Sympathy esp from the anti-left crowd b) The cause of his resignation ( and even possibility of the govt falling) would much more be "remembered" as failure of the nuke-deal, than issues like inflation, failure to tackle terrorism etc etc ... c) If indeed the general elections are to be ahead of time, and done together with the state elections in MP and Rajasthan, Congress may be hoping that atleast in those states, the state anti incumbency ( against BJP) will be more than the one against the center d) Indications are that inflation is likely to keep rising in the near future also, so holding on to power may just do more damage to congress

Guess who ruled India at that time ? And guess who was Finance Minister at that time !!!!!! and yet " Congress ka haath gareebon ke saath" ( "The Congress' hand is with the poor" is their election slogan) , and Manmohan Singh is considered an "efficient" FM .... lol may be its his Cambridge and Oxford University degrees as oppossed to say, a "locally educated", Indian Administrative Services Yashwant Sinha ... ( after all Sinha titled his book "Confessions of a Swadeshi reformer" which would not have gone well with the Indian- English- Media )

Meanwhile looks like Mayawati has jumped out of what she perhaps sees as a sinking boat .. the months ahead will be interesting to watch for those interested in Indian politics .. and I strongly tend to believe that the outcome of the next general election will indeed decide whether the 2020 vision will go anywhere or not ....
on June 21, 2008 No comments: Links to this post

861 females for 1000 males, and "ye to ho na hi thaa" ( this was bound to happen) - that guys in Haryana ( and some othe states in India too) have started finding it hard to find suitable girls...

"If you are poor, without job and have small land holding then you get no girls to marry," says Ranu Bai.

But unfortunately, instead of solving the issue some guys are busy exploiting the situation ....

Like other areas where demand outstrips supply, illegal rackets start flourishing, with devastating consequences, as was the case with Sukhdev.....

They showed Gurcharan Singh, Sukhdev's brotherin-law who had come to finalise the marriage on his behalf, the prospective bride, Guddi. She looked too good to be true. Gurcharan immediately agreed to the marriage proposal and paid some token money.

That's when the racket unveiled itself. Kartaro and Charno demanded Rs 35,000.
"They said the girl's family was very poor and needed monetary help to perform the marriage rites," says Ranu Bai.

Sukhdev's family, who earn barely Rs 5,000 a month, could not meet the demand but relatives and other villagers pitched in. "We all gave whatever we could, after all it was the question of Sukhdev's life," says his neighbour Mukhiyaro.

Kartaro and Charno were paid in two installments. The marriage was fixed for May 28 at Dabwali. When the baraat reached the venue, it wore a deserted look. On being confronted, Kartaro and Charno produced Rani, a middle-aged widow with two grown up children. She was not the girl Gurcharan had seen.

Its heartbreaking to see such things happening ! If this business is allowed to flouish, it will only aggrevate the issue !

Meanwhile, the Prime Minister himself is playing politics with the issue . In a recent conference on "Save the gil child", PM hits out at Punjab, Gujarat, Delhi for poor sex ratio ... . Note two things - Punjab and Gujarat are ruled by Congress' opponents. Not only does the PM base his accusations on the census 7 years ago, he quotes confusing figures ( if the above report is to be believed) .

The census figures illustrate that it is some of the richer states of the country where the problem is most acute and these states include Punjab which had only 798 girls (per 1,000 boys), Haryana 819, Delhi 868 and Gujarat 883 girls per 1,000 boys in the 2001 Census.

If this map is to be believed - http://www.mapsofindia.com/census2001/sexratio/sexratio-india.htm - J & K , UP , Haryana and Sikkim have a much moe serious issue than Gujarat. http://www.iloveindia.com/population-of-india/sex-ratio.html quotes Gujarat's sex ratio as 921:1000 . May be the "girl: boy" ratio is different from "female:male" .. even then, the PM conveniently forgets that "In the decade of 1991-2001, the sex ratio of Gujarat has reduced significantly from 934 to 921" ( source: http://www.mediaware-infotech.com/newsletter/Gujarati/demograph.htm ) . A good chunk of that period was ruled by the Congress at the center and in the state.... Modi took over in 2001

With Beti Bachao Andolan—a term coined by Chief Minister Narendra Modi—gaining momentum, social mindset is changing in Gujarat, a state which had one of the poorest sex ratios in the country. From 802 in 2001 and 822 in 2002, the sex ratio has climbed to over 870 in 2007 in the state, against a national average of 933.

No doubt the statistics is more confusing than what the PM quoted ( strengthens my feeling that there is a mix up of girl and female sex ratio ) - but one thing is clear.. Modi has initiated steps unlike most other states . In fact in one of his speeches he says ( slightly in a lighter mood) something along the lines of "The situation was so bad that if it continued then 20 in 100 guys will end up like me" , and then he details the step that were taken by his government

Indeed, statistics are many times not perfect, but if the Man Mohan Singh's intention is indeed to use his economics brain power to quote the statistics as he wants and play politics with it, he is proving himself to be no better than the fake bride racket !